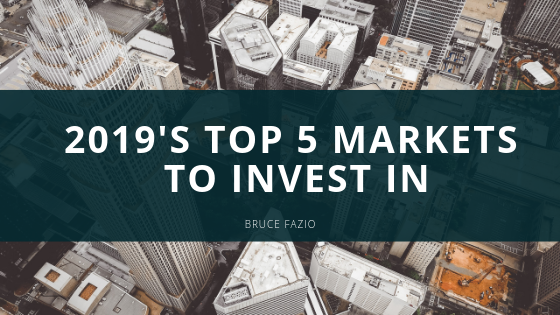 We’ve talked about the benefits of investing in properties and how important it is to build a property portfolio, but what about actually investing? When it comes to real estate investments, researching markets is essential. The volatility and success of a market changes from year to year, but certain trends can clue you in on where your money would be best spent.

For 2019, real estate experts are warning investors to steer clear of big cities where the price of real estate is soaring, like in Seattle, Miami, San Francisco, and Denver. Instead, focus on smaller cities and satellite towns that are seeing a rise in their populations. In these places, job opportunities are cropping up twice as fast, home values are growing 50% faster, and rent is experiencing a 20% growth. Here are a few to keep an eye on for a potential investment opportunity:

With the average rent for a 1-bedroom apartment sitting at $808 a month, Cleveland is a small city that boasts a high-quality of living with an affordable price tag. Job growth has risen to 2.5%, indicating that opportunities are becoming the driving force behind Cleveland’s growing popularity. Investing in a multifamily property might be a worthwhile investment in this city as the population continues to grow.

As the country’s 17th largest city, you might assume that this would be a market to steer clear of. However, the cost of renting an apartment or buying a home in this city has remained affordable, despite its continuous growth. In 2018, Charlotte boasted a five-year projected population growth rate of 1.5%, which is noticeably higher than the national average of 0.7%.

Who doesn’t want to live by the beach? Despite Jacksonville’s envious views, rent is relatively cheap, and the employment growth rate sits higher than the national average. The city’s median age is 37 years old, which could make investing in a multi-family property a great decision. Additionally, the city’s rental yield is also higher than average.

In a survey of investors, 58% recommended buying a multi-family property in Orlando. With employment growth rates well above the national average, and numerous industries beginning to call the city home, the population of Orlando is growing exponentially.

Another Tar Heel State city to keep an eye on. Rent in Raleigh is a few hundred dollars more expensive than the other cities on this list so far, as is the average cost of a single-family home, but the population and the amount of job opportunities here are growing incredibly fast. According to the region’s investors, Raleigh boasts a strong local economy, as well as high investor demand, numerous development opportunities, and an impressive amount of public and private investments.

While these are only the top five predictions, the various other hot markets indicate that investment opportunities abound in the southern parts of the nation. Look into areas that interest you and see where they fall in comparison to national population and employment growth averages. As previously stated, research is key when it comes to real estate, but especially when it comes to investing. You often have to “predict the future,” so projection rates can really clue you in on whether an investment is a great idea or something to stay very far away from.