The Increasing Popularity of Solar Power 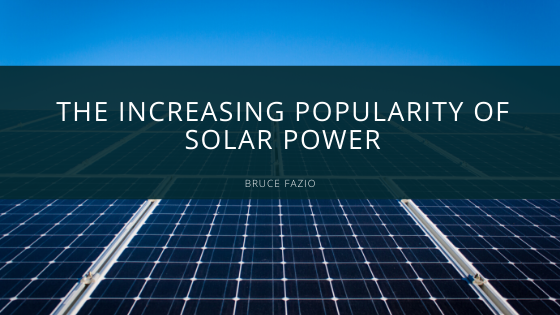 Even though solar only accounts for a small percentage of the world’s energy leading into the 2020s, it’s rapidly growing in popularity. When comparing the growth of solar collection use from 2000 to 2019 the increase has been 300-fold. In the past decade solar technology has rapidly improved. A trend toward sustainability and corporate social responsibility has helped fuel the growing interest in solar power.

Reasons for Solar’s Rise in Popularity

Solar is becoming increasingly more popular as an energy source because it’s an unlimited supply of energy that can reduce costs and greenhouse emissions significantly. The energy is collected from the sun through an inverter. Once the owner pays for the equipment, the energy collected from the sun is free. Keep in mind the sun’s energy that touches the earth’s surface every second is enough to provide a two-hour supply of energy for the entire planet.

Another major driver of the rise in solar installations is the declining costs for manufacturing panels. The more manufacturers can reduce costs of making panels and inverters, the more attractive solar becomes as an investment to businesses and residential homeowners.

It’s quite likely solar installations will continue to surge over the next few decades, based on all the local and state governments planning on sustainable infrastructure improvements by certain benchmark dates, such as 2040. As solar technology becomes more affordable to the masses over the next few decades, it’s expected to become more widespread and even omnipresent.

Solar companies are finding more and more uses for solar cells and ways to mass produce them at lower costs while protecting the environment. Battery technology will need to improve in the coming years, as power demands will call for more power supply in less space. One of the keys to improvements in solar technology is the increasing efficiency for solar cells to capture light and convert it to electricity.

An interesting scientific property at a micro level occurs when electrons come into contact with light particles called photons. These photons are capable of absorbing energy to the point of shifting from a low-energy conduction band to a high-energy valence band. Each year scientists at high-profile universities make new discoveries that lead to more efficient and advanced solar technology. With each new advancement in solar technology, its popularity will only continue to increase since it will become more effective and user-friendly.