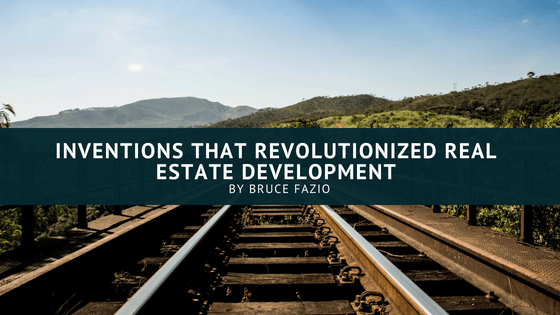 Real Estate Development is an industry that is quite unique as compared to other industries here in the United States. When we look back at the history of our country, especially in its early years, we see how many aspects of history have helped to evolve the industry as a whole. Think about colonial times where the only people who owned land were the various governors, the English Crown, or Native Americans. This changed once individuals were allowed to buy land. Then, in 1862, the Homestead Act supplied 160 acres of land to settlers for each adult in their family.

The federal and state governments were using land sales as a primary option to raise revenue which sparked the opportunity for developers to come up with their own ideas to shape the country. This newfound opportunity along with these inventions that developed over the years revolutionized real estate development.

The invention of the railroad is responsible for a number of things including the first generation of residential land development in the mid-19th century along with reshaping the industrial landscape of cities. Railroads allowed manufacturing to spread out and be done at a larger scale which prompted the construction of tall warehouses and factories, and the towns that were created to sustain them like Gary, Indiana, and Birmingham, Alabama.

The elevator may have been invented centuries prior to its effect on real estate, but by the time the 1920’s and 30’s came along, it had reached a level of speed and reliability that it could make an impact on building height. Starting in 1922, there were only a few elevators in Chicago and Rockefeller Center in New York City. Then, a few years later we saw 58 elevators installed in the Empire State Building which helped to serve its 15,000 daily users. Afterward, the invention took off and contributed to some of the amazing skylines we see today.

Before the invention of steel back in the late 19th century buildings were typically made of wood or cement and could only be built so high without it becoming too dangerous due to such limitations. The Home Insurance Building in Chicago was actually the first building to be built using a steel skeleton. It wasn’t until the early 20th century and the price of steel declining that it became a much more widespread resource. This eventually led to the increase of skyscrapers in the major cities across America.

As we look at some of the inventions of the past that have shaped real estate development today, it’s important to also think about the inventions that will change the industry in the future. Some of the obvious major players include artificial intelligence, alternative energy sources, and 3D printing. We live in an evolving world where new technological advancements are unfolding every day and each one brings with it a level of innovation that previously wasn’t available. With that in mind, the real estate development industry is one to keep an eye out for the foreseeable future.